Born out of strife and necessity, the Original Land Rover Defender continues to dominate the off-road after 72 years.

In order to fully get to know the Land Rover Defender, we must cast our minds back to World War II Era England. During the war effort, the English automotive manufacturers halted production of their vehicles in exchange for the production of military machinery and weapons.

Consider Rover, for example — Rover was known for manufacturing luxury motorcars since 1901. In the late 30’s, they began developing Tanks such as the Rover Meteor Tank and later on Rolls Royce turbine engines.

In the years after the war, there was no demand for the luxury vehicles Rover originally produced. During this period, all raw materials were limited to construction and industrial equipment manufacturers. The lack of demand and resources available to Rover put the company in peril. At the time, Wilks operated as Rover’s Chief Designer, with an idea that would secure Rover’s future. Wilks formulated plans to produce an all-terrain vehicle similar to the Willy’s Over-lands used during the war, but with an emphasis on farm use.

This genius struck him while using army-surplus vehicles during his frequent farming.  The vehicles were too small for agricultural work and tractors weren’t versatile enough in transport and mobility.

Out of necessity, Land Rover was conceived in 1947. The original Land Rover prototype was built using surplus materials such as a Jeep Chassis, Birmabright panels, a drivetrain from a Rover P3 and, strangely enough, a center steering column which was later scrapped from the production model.

What really set the Land Rover apart from the rest was allowing the vehicle to successfully rove British farm lands. The Series I Land Rover entered production in 1948 and launched at the Amsterdam Motor Show as a light-truck for farm and light industrial use. The Series I was a 1.6 liter Petrol Engine that produced a staggering 50bhp and a 4 speed manual gearbox with a 2 speed transfer case. This revolutionary design allowed the Series I to disengage the front axle from the transmission, allowing permanent four-wheel drive.

Soon after, Land Rovers were dominating the British landscape.

The Land Rover was designed with a sole purpose: to dominate any form of terrain under any circumstance, regardless of conditions.

Land Rover’s success soon had buyers wanting a Land Rover with creature comforts. This led to the launch of the Station Wagon. Expanding their model range in 1955, Land Rover introduced the station wagon differing from the previous Tickford with a traditional Land Rover interior and aluminum body panels. Design elements such as a safari roof and seating for several passengers coupled with Land Rover’s superior all-terrain capabilities further expanded Land Rover’s reach. 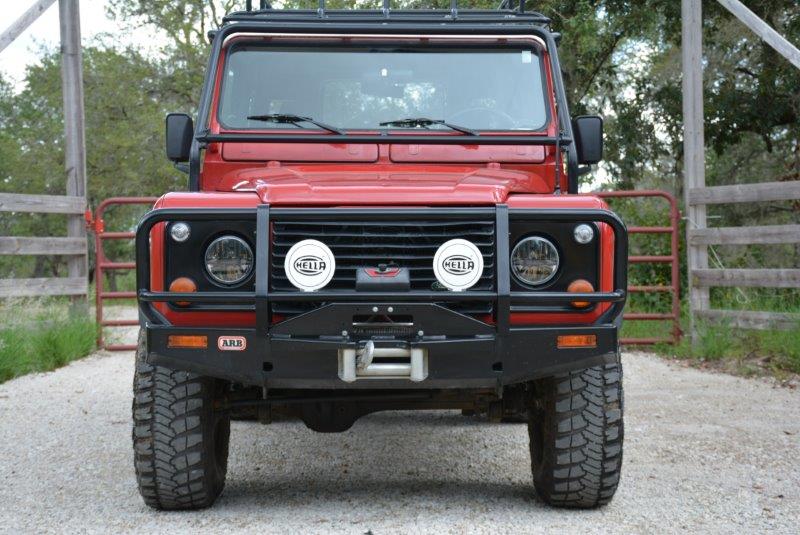 No vehicle has seen more of the Earth than a Land Rover has. Seems fitting, doesn’t it? Decades and several names changes later with years of technological advancements, Land Rover announced in 1983 the 90 & the 110 names which reflected their wheelbase.

These vehicles were designed with creature comforts while keeping true to their utilitarian ancestral forms.

Differing from its predecessors with a modernized interior, one piece windshield, stronger drive trains and a more forgiving coil over suspension suited for daily use — the ultimate off-road vehicle came to be. The period following the production of these models led to a rise in the demand for recreational utility vehicles for the family.

Land Rover responded by creating a family version of the 90: The Land Rover Discovery. While the 90 and 110 were still in production, they had to differentiate from the Discovery. And thus, the Original Defender was born as the utilitarian counterpart of the Discovery. Announced in 1990, The Land Rover Defender, effectively being the 90 & 110, received 2007 modernized features and major revisions to the interior, and continued to be produced all the way until it ceased production in 2016.

Despite the major success of the Land Rover Defender, these vehicles were only sold to the American market from 1993 to 1996, though for 2020 Land Rover has released a new iteration of the defender.

The Land Rover Defender to this day remains the epitome of off-road excellence, and companies like E.C.D Automotive Design keep the Defender name alive. They hold true to the power and nature of the original Defender’s adaptability.